The N'Djamena regime, in power over Chad since December 1, 1990, faces series of tensions here and there. From inside and outside, the pressures are strong and all converge for the departure of the Patriotic Movement of Salvation (MPS) regime.
Since Idriss Deby Itno’s disputed re-elections in April 2016 by the entire Chadian political class, the Sultan of Amdjarass and even the famous false Marshal of Chad have been living through a difficult period and the end of his reign.
First paralyzed by the uprisings (strikes, popular tensions, etc.), civil society (Le Mouvement Citoyen le Temps, TropC C'estTrop, Ça Must Changer, Justice ou Rien, Iyina, CaSuffit, Tamana, Collectif Tchadien Contre la Dear Life, the transformers and today the affair of Mr. Yaya Dillo Djérou, next candidate for the presidential elections of April 2021 ...).
Mr. Idriss Deby would be the commissioner of the assassinations of the Djérou family! How else to understand that in order to summon a Chadian citizen to report to the police, the army deploys a whole military armada to violate Mr. Yaya Dillo's home by killing several members of his family in his path because he was declared candidate for the presidential elections of April 2021 in Chad?
Such an action in the middle of the capital cannot be carried out without President Deby being aware of it !. The UN for its part through its general secretariat calls for a rapid investigation to elucidate the actions of this despicable act in which Idriss Deby Itno's regime is 100% soaked.
The days to come we will say more about the future of this regime because the army which was its force seems divided and this constitutes a permanent threat for the tenant of the palace of Djambalngato for 31 years.
By the Charilogone editorial staff. 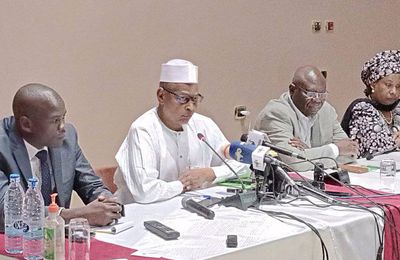